We are looking at a remarkable and memorable self-portrait of an aged man watching us preoccupied: the subtle layout of the image depicts him nearby a pitcher with flowers colored in grey-blue and dark-mauve – tones which reflect a tragic and hopeless melancholy. This idea is also emphasized by the indecisive form of petals, “chilled” in white, pale tints. In his dialogue with the viewer, the artist seems to address a reproachful regard behind his jab thick rimmed glasses. The corners of his mouth drop and the eyelids cover the light of his eyes expressing a certain anger ready to burst in verbal imprecations. Is there a suggestion of an excruciating, heavily mastered disillusionment, hiding gloomy forebodings and reproaches? The shape of the visage ignores the naturalistic details, but insists on a linear transfiguration that enhances the expressiveness of emotional and mental state of overwhelming hopelessness.
The black cap is placed like a guillotine over the character’s head, composing a bright triangle of the forehead together with the glasses; this light falls over the line of the nose and the left cheek. The composition of the scarf and the collar in conjunction with the face suggests a symbolic cross dramatically exacerbated in a plastic manner. This inner tension, this bad psychic vibration nesting in the human soul can be felt only in the frowning portraits of Corneliu Baba. What is the reason of his anger? Is it something personal or maybe a dramatic quarrel with the world, the game of the crying laughter of Picasso’s Harlequin, or the expression of the “commedia dell’arte”? Does the artist imagine himself as a sad Pierrot betrayed by a vulgar and frivolous Colombine? Beyond the jester idea of the depicted character, this portrait-mask emphasizes the intense drama of the portrayed artist; the symbolic of the character should be linked with the existential vicissitudes of the human nature faced with the passage of time and the failures of his soul. Is it a rhetoric assumed as a „leçon de style” refusing itself to the concupiscent vanities sensually radiating from Rembrandt’s portraits, especially those with Saskia?
No, this is the grave self-portrait of a man for whom the decoded meanings of the evolution hide upsetting premonitions about the times which were to come. Or, is it the strange sadness of some revolutionary figures such as Paul Cézanne and Van Gogh, whose drama consists in their need to free through their art? Maybe a little of all these who “filled” the pitcher of tragedies and infirmities “swallowed” by the artists, no matter the epoch or the social success! Emil Băcilă was one of those who felt keenly the heavy tragedy hidden inside the artist’s soul. He was dedicated to the School he belonged to and he followed its destiny.

As a professor at the “Ion Andreescu” Institute of Fine Arts in Cluj, he consumed his career according to the success of his students. He kept his artistic work in the shadow of his teaching career; now, some time after his death, 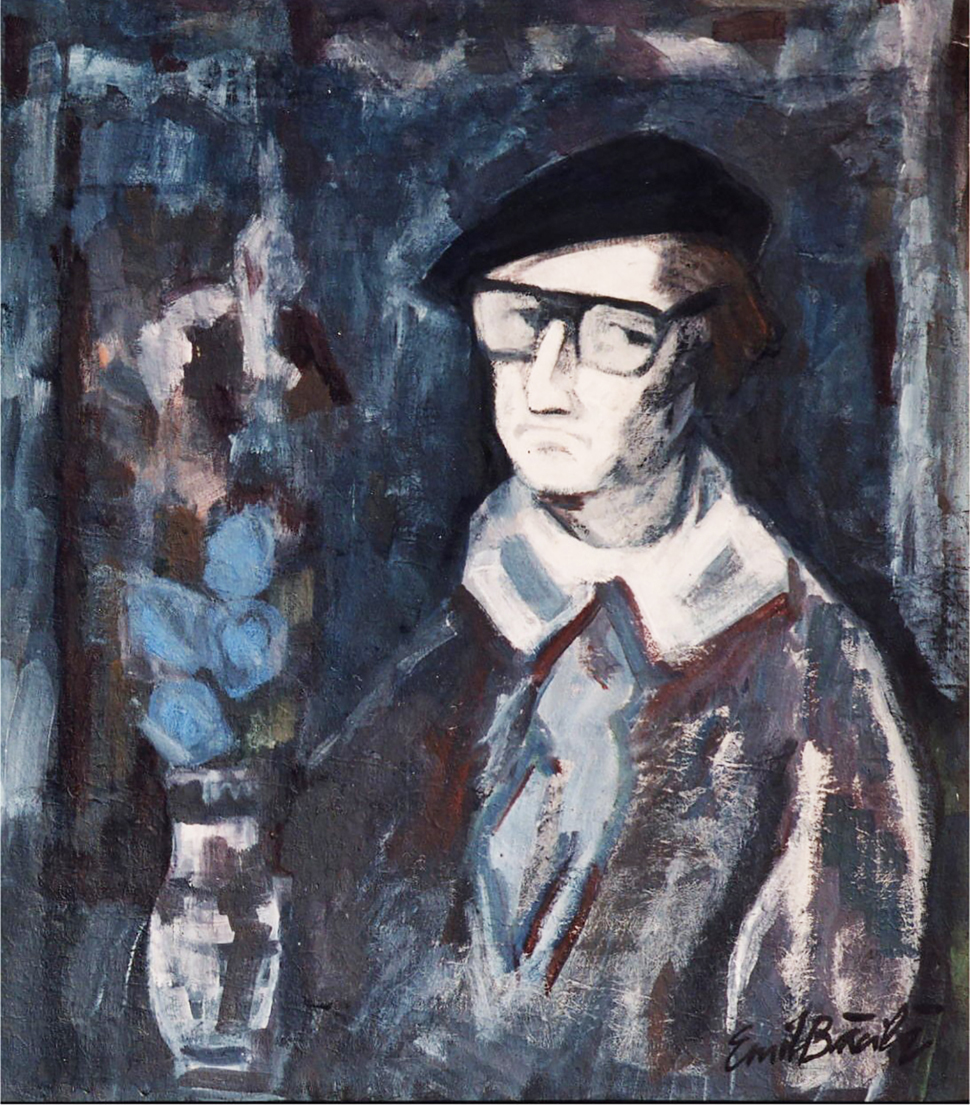 he became a part of the whole which is the School of Cluj, with its central figures: Petru Abrudan, Petru Feier, Nicolae Brana, Catul Bogdan, Liviu Florean, Nicolae Bălaj,Vasile Crişan, Paul Sima, Mircea Vremir, Ghiorghi Apostu and others.

However, why the anger? His anxiety, the allusive reproach of his thoughtful eyes is coming from his fear; he seems to perceive a vague, unbearable horizon – the gradual ruin and collapse of the modern painting’s edifice which moved up the 19th century in Europe and reached the limit of its extinction under the cruel blow of the “democracy of arts”. The attitudes that trample fragile spirits, shy and introspective sensibilities, were translated into a chaotic model that did not offer to the world of art a better, more valuable model, but simply were following to exterminate the old values of art. Thus, a self-portrait of the artist can serve as a testimony.
The School of Cluj has manifested permanently in a multi-cultural climate and it has developed a relationship of aesthetic and stylistic solidarity between its members.
Even if it seemed a “conglomerate”, this School gathered and “distilled” the plastic talent of its students, emphasizing on the characteristic of plastic art.
The “smooth” transition from a borrowed socialist model to an art of national sensitivity reconstructed the cultural integrity and the affinity with the Romanian art of the interwar period. Finding his place in this “puzzle” of identities, Emil Băcilă presents himself in a different light – as a passionate artist, a fervent supporter of a reluctant modernity, virtuous and elegant in his anti-militant message.